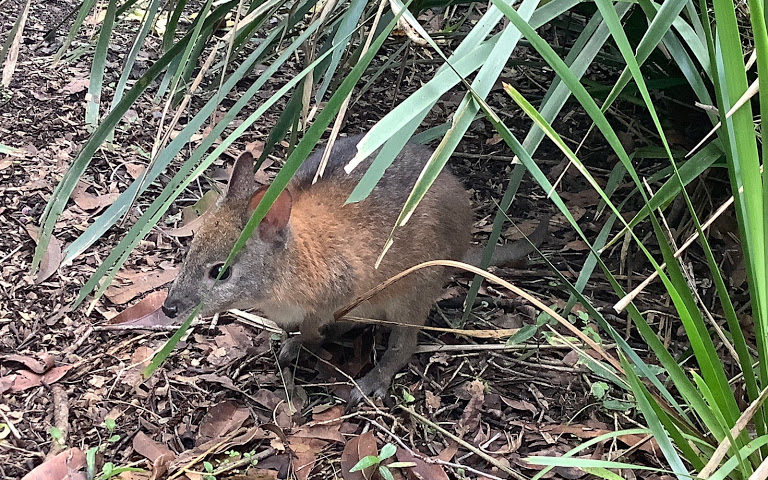 Fig and Foxglove have been with us in care since they were very little. Fig came in as a beautiful velvet, and from the beginning was full of beans. Next came Bolly-Gum, she matched Fig’s size when she arrived to us later, fully furred but still very small. Bolly was timid and would hop after Fig, hugging her whenever she stood still. Then along came Foxglove, the fluffiest, reddest melon of the lot, her wonderful coat earning her her name. Bolly especially welcomed Foxglove, now she had an even fluffier hug buddy! But sadly Bolly was struck down by an illness, and since the two remaining melons have become thick as thieves.

They really were overdue to get down to the outdoor yard, but we’ve been having problems with a feral fox, which has held things back a bit. In the meantime, the two melons have embraced their teenage-hood in opposite ways; Fig has become a hammock-slug, a much loved hot water bottle to her wallaby friends, and Foxglove has become a bit feral, and very sassy! A common scene in the infant room is Fig being affectionately groomed by a tangle of wallabies, while Foxglove runs from corner to corner, playing catch-me with the humans trying to feed her. But she does love a cuddle every now and again. In recent days, the melons have been displaying more adult behavior, we caught them sleeping symmetrically on the floor in the back room, with their legs out straight like grown ups.

Today we took them down to the outdoor enclosure, so that they have more room to run off all their hormones and munch new things and practice hiding. They were overwhelmed from all the stimulation, their ears clocking around to pick up all the new sounds — strange birds, swooshing trees, and the thumps of other macropods. Foxglove tends to express her offence at anything out of the ordinary by stomping her feet, which is not unusual for melons but she will do it to anything, for example, a tub of clean laundry that wasn’t in the room before, or a curtain in the wrong place. No doubt she is out there this evening, stomping at the moon.